FLORESVILLE WILSON COUNTY TEXAS .... Photograph of students in front of school house. The card held by the boy in the middle of the front row says; Floresville, Texas. The boy's name is Haywood McDaniel. The boy who is third from the right in the first row is Charlie Culpepper. The teacher on the top row, far left, is Miss Myrtle Hurley (Mrs. Ed Franklin).
This photograph is part of the collection entitled: Rescuing Texas History, 2010 and was provided by the Wilson County Historical Society to The Portal to Texas History.

School district officials and historical association members listen as La Vernia Historical Association President Elaine M. Stephens outlines the history of the original La Vernia ISD school building, now part of the district's junior high campus, during a plaque dedication ceremony Nov. 16. The plaque is a gift from the historical society. A bond issue of $30,000 funded the building, which was "all modern" at the time and included electric lights and indoor toilets.
Witnessed by La Vernia Heritage Museum Director Susan Richter, Dr. Hensley Cone, superintendent of the La Vernia Independent School District, assists Elsie (Witte) Ferry Nov. 16 in unveiling a plaque recognizing the 100 Building on the La Vernia Junior High School campus as the first school building constructed by the school district. Located at the corner of Bluebonnet Road and D.L. Vest Street, it was completed in 1930.
Plaque dedication special guest Elsie (Witte) Ferry, 95, a lifelong La Vernia resident, singles out her 6-year-old self in the photo from 1930 on the historical plaque, when La Vernia ISD's first school building was completed. Among the "all modern" features of the new school were indoor toilets — which Elsie's family didn't have at home at the time!
************************
COURTESY / La Vernia News

Reader Patty Flora Sitchler says, " Well, I'm still going through old pictures and found the Marcelina School picture circa 1910.  Miss Sadie Dennis was the teacher.  My grandmother, Jettie Lou Cale Tipton is in the picture - anyone else recognize a relative?" Patty's great grandparents were G.B. and MaryBelle Cale who are both buried at the Marcelina church.

Where was this school located? Owen Lowak thinking of the old Poth, Wilson County, Texas grammar school recalls, " this  old building of days gone by, exists only in a few photos and the minds of people who as kids graced her halls and rooms. I attended from 1957 to 1960, after which she was taken down and put to rest. A new building was erected in her place, but did not hold the same charm. The wood staircase at each end that squeaked as the children went up and down. Sliding down the fire escape was quite a thrill. At recess, boys playing baseball, girls jumping rope and hopscotch on the dirt playground. All this exists only in the minds of those who attended back in those days. Just My Memories." [Thanks Owen for the photo & Memories ]

LILY GROVE WILSON COUNTY TEXAS ... is located east of Stockdale on FM 1347 and CR 538.  The school was moved to Stockdale.

Calaveras (Spanish for "skulls") is at the junction of U.S. Highway 181 and Farm Road 3444, eight miles northwest of Floresville in northwestern Wilson County.

It was originally in Bexar County and was called Wright when it was established in the early 1860s. A boundary change put the site in Wilson County in 1869, and the name was changed when a post office was granted in 1882. The population was twenty in 1885, when B. Johnson was postmaster and mail was brought by horse from San Antonio. The San Antonio and Aransas Pass Railway reached the area in 1886. By 1892 the town had a hotel, three brickyards, a saloon, a barber shop, a bakery, two general stores, a meat market, and a reported 250 residents.

A Calaveras school was in operation by 1896, when it had an enrollment of sixty-three. The town reached a peak population of 369 in 1900. In 1925 the post office was closed, and the station was reduced to a flag stop.

In 1947 Calaveras had one business and a population of 100. Since that time the population has remained steady, and in 2000 Calaveras still had 100 residents.
***************
COURTESY / Texas State Historical Association
PHOTO COURTESY /Wilson County Historical Society

Floresville Tigers were once the Kangaroos

DID YOU KNOW .... the roaring Floresville Tigers were once the jumping Kangaroos???

Elaine H. Kolodziej in 2013 wrote that
Cotton Beam, owner of Shorty's Café in Falls City, thought folks might be interested in seeing a picture of an early Floresville football team. He could not remember who gave it to him "a long time ago," but it bears the logo for Farmers Insurance Group on one sleeve. He thought that people might want to see what the 1926 Floresville football team looked like.

Indeed, the photograph on the T-shirt shows striped uniforms. Preliminary research shows that football was organized in Floresville in 1914. The games were played on a dirt field behind the "peanut scales," which is now Lubianski's. According to "What's Cookin', FHS," the original school colors were black with yellow stripes, and they were known as the Floresville Kangaroos.

The book also said that by 1926, the colors had changed to maroon and gold and the Tiger mascot had been adopted. The photograph, however, appears to be that of the Floresville Kangaroos, although it is dated 1926. It was apparently taken the year that they changed their name to the Tigers.

During those years, pep rallies were held in the old Pershing Theatre, 1012 C St., which was the original building of the Wilson County News complex. Interestingly, when the football squad acquired "new togs, shoes, and gear," in 1921, the players would take their shoes to the Vela Saddle Shop to have cleats added. (The Vela Saddle Shop, located next to the Pershing Theatre, is now the main office of the Wilson County News.)

Did ya know...that after the Civil War and the Emancipation of black slaves, those slaves established Freedom Colonies in Floresville and Wilson County? After the Emancipation of slaves after the Civil War, the slaves started buying land and establishing their own communities to raise and school their children, and to farm their own land. They called these communities Freedom Colonies.  These Freedom Colonies, often called Freedmen Colonies, where common across the south.These Colonies were established during the 1870s and 1880s as freed slaves acquired enough money to purchase land and build houses. These Freedmen also built churches and schools to support their local communities. Wilson County has 8 Freedmen Colonies and include: Cruse (Crew's) Colony, Doisedo Colony, Floresville Colony (Dunbar), Grass Pond Colony, Hay's Colony, Montgomery Colony, Nockenut Colony, and Steven's Colony (Listed as Stevenson Colony in 1903-04 Wilson County school census).  In fact, Texas Freedmen achieved a higher percentage of land ownership than in any other state of the Deep South. (Courtesy of Wilson County Historian Mark Cameron) 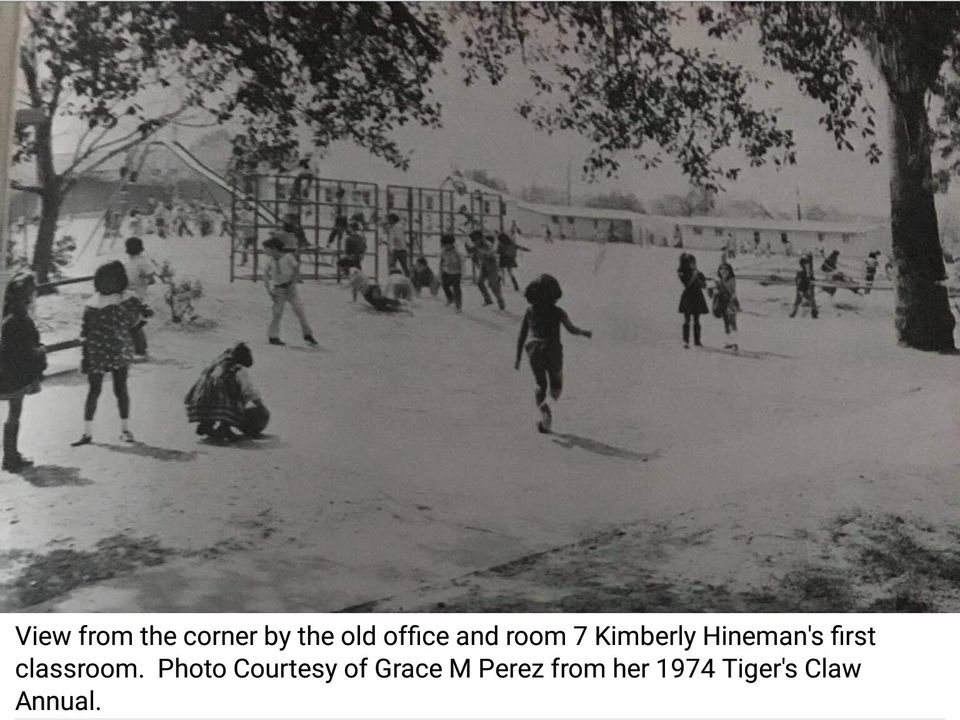 Where was this picture taken in Wilson County Texas? Kimberly Hineman  writes, "This is the Floresville old elementary school. The classrooms numbered 1-6 are behind the person taking the picture. Straight ahead across the playground is the cafeteria. To the left is the concrete  slab used for PE. On the right (white building) we have the music building and the nurse's office. The portable I believe was Life Skills. The difference from when I taught there is the music building. It was torn down and the Foriester center was built. I taught in the portables for a couple of years before the new building was built right there. " One of the college's graduates was Minnie Washington Yates, the daughter of formerly enslaved parents. She and her husband, R. C. Yates, settled in the town of Poth on about 100 acres of land. They moved a schoolhouse onto their property in 1916, creating the Mount Moriah Baptist Church and Community School. Minnie and a college classmate, Myrtle Everage, were the teachers for the one-room school.

A Texas historical marker recognizing the legacy of Minnie Yates, to be located in Poth, was approved by the THC in February.

Yates (1878-1970) was an African American educator who studied at Guadalupe College in Seguin. On her 100 acres, she moved a former schoolhouse to be home to Mt. Moriah Baptist Church and a school for African Americans. This application received a letter of support from State Sen. Judith Zaffirini. Marker location: Poth, 156 County Road 226 Submitted by: Jesse Brown, Krystal Foundation, Carmel, Indiana