While the Bridge at McAlister Crossing, also known as Mueller Bridge, has always had a special place in the hearts of local residents, now it will also have a permanent place in history.
The bridge, which is located on C.R. 337, has been designated as a "Recorded Texas Historic Landmark" largely as part of the efforts of La Vernia residents John and Shirley Grammer and the Wilson County Historical Society.
"Wilson County has not received a 'Recorded Texas Historic Landmark' designation since the Polley Home and Brahan Masonic Lodge in 1965 and the Wilson County Courthouse in 1984," said Gene Maeckel, chairman of the Wilson County Historical Society.
The Grammers have been involved in working toward a marker for the bridge since 1996, when Maeckel received a letter from the Texas Department of Transportation informing the society and the county the old bridge on C.R. 337 was eligible for listing in the "National Register of Historic Places."
Maeckel forwarded the letter to the Grammers and suggested they research the bridge and try to get a marker and possibly save the bridge, since it was an example of early bridge design in the area.
"TxDOT thought the county might want to build a new bridge there," Shirley said. "They hated to see the bridge torn down because it had historical value."
In a letter to TxDOT, Maeckel told the agency that the members of the historical society overwhelmingly felt the bridge structure should not be removed.
"This bridge has local significance and is worthy of preservation," Maeckel said. "And there is strong local interest in saving the structure. This part of Wilson County has a rich historical past."
And because of that rich history, the Grammers went to work on getting the bridge designated as a historical marker, although the couple had a hard time finding out information about the bridge's namesakes, John Murphy and Isabella McAlister, who settled in La Vernia with their family in the early 1850s.
"We had to do a lot of research to get information on the McAlister family — there was very little documented," Shirley said. "They played a very important role in the development of Wilson County and John McAlister was an early county official."
In 1857, the McAlisters purchased several hundred acres of land on the southwest bank of the Cibolo Creek. The natural stream crossing adjacent to their property became known as McAlister Crossing and served residents on both sides for many years.
The McAlister children subdivided the land following their father's death in 1885. About the same time, county commissioners designated the local route, including the crossing, as Road No. 62, which is presently C.R. 337.
In 1906, the Henry Mueller family purchased land on the east side of the creek, and a son later purchased land on the west side, just south of McAlister Crossing.
As settlers began to arrive and settle on both sides of the Cibolo, it became apparent to the settlers on the east side of the Cibolo that a shorter route to La Vernia and access to the railroad was needed. Settlers on the west side of the Cibolo needed a more convenient route to the Sutherland Springs-Seguin Road.
An old Indian crossing on the Cibolo on the McAlister property thus became known as "McAlister Crossing," and was used until a bridge was constructed. Due to the depth and steep embankments of Cibolo Creek, natural crossings were few.
According to the Grammers, McAlister Crossing provided a vital link between the old Sutherland Springs-Seguin Road, now F.M. 539, and the old Chihuahua Road, now C.R. 342.
According to historical documents, on May 14, 1915, the county commissioners approved construction of five bridges during the meeting, including the "Bridge at McAlister Crossing." The title was later shortened to Mueller Bridge, since many of the Mueller family members owned property on both ends of the bridge.
The commissioners concluded it was necessary for the bridges to be erected for the good of Wilson County and for the safety and convenience of the public.
The contract was awarded to Alamo Construction Co. in San Antonio at a cost of $8,500.
In order to provide funds for the payment of the bridge debt, the county commissioners ordered a county road-and-bridge tax of 15 cents per $100 valuation of all taxable property in the county, according to meeting minutes from the commissioners' court.
Fritz Mueller, son of Henry Mueller, owned a blacksmith shop on F.M. 539 on a portion of the original Henry Mueller survey, which was located on the east side of the old Mueller Bridge. Walter Mueller, son of Fritz who lives in San Antonio, said that Fritz made the nuts and bolts in his blacksmith shop that were used in construction of the bridge.
The bridge was officially completed on Nov. 8, 1915. The three-span, 252-foot bridge was special because it was only one of two multi-span Warren polygonal chord bridges in the state.
The bridge served local residents for more than 70 years. It was closed to traffic in 1988.
Over the years, floods have taken a toll on the bridge, especially the floods of 1973 and 1998, which caused serious damage to the support structure.
The Grammers said the project is rewarding now that it is complete. Now the focus is on saving the old bridge.
"It's such a pretty bridge and all we have left in the La Vernia area," Shirley said. "Historic bridges are hard to find because counties usually tear them down to build newer bridges."
The Grammers would like to see the bridge saved and the addition of a hike-and-bike trail, where people could ride across the bridge and the Cibolo that runs underneath it.
"It could be a beautiful tourist site for Wilson County," Shirley said.
*************

By Nell Sutherland, WCN Correspondent
Wilson County News, 2005
[Texas Historic Landmark marker unveiling Dec. 3, 2005, on F.M. 539 near the Mueller Bridge at McAlister Crossing over Cibolo Creek]
Recorded Texas Historic Landmark marker was unveiled Dec. 3 on F.M. 539 near the Mueller Bridge at McAlister Crossing over Cibolo Creek. Shirley and John Grammer are credited with securing the designation through their research and documentation of the bridge's history.
According to the Grammers' research, John Murphy McAlister and his wife, Isabella, settled in La Vernia with their family in the early 1850s. In 1857, they purchased several hundred acres of land on the southwest bank of Cibolo Creek. The natural stream crossing adjacent to their property was known as McAlister Crossing, serving residents on both sides of the creek.
After McAlister's death in 1885, his children subdivided the land, and the route was designated a county road (now C.R. 337).
In 1906, the Henry Mueller family purchased the land on the east side of the creek. A son later bought land on the west side. Because Mueller family members owned property on either end of the bridge, it was often called Mueller Bridge.
In 1915, county commissioners contracted with the Alamo Construction Co. of San Antonio to erect five bridges, including the one at McAlister Crossing. This, the most expensive, was completed that same year at a cost of almost $9,000.
The three-span, 252-foot bridge features polygonal camelback trusses with multiple panels. For more than 70 years it served local residents, surviving Cibolo Creek's occasional floods and raging waters. Closed to vehicular traffic in 1988, it is no longer accessible by public road.
****************
COURTESY/ Wilson County News 2005

This bridge made many memories what did she connect?

The Sutherland Springs Development Corporation ....  built the first high water bridge over the Cibolo in 1892.
The bridge was of iron and wood construction. It's spanned the Cibolo at the foot of County Avenue to simplify trade from within the San Antonio River Valley. They say that during the well-remembered flood of 1913, the bathhouse knocked off the end of it. It was reconstructed.
This bridge connected New Town Sutherland  Springs  with Old Town Sutherland Springs...
Photo COURTESY/SSHM

Bridge over the Cibolo 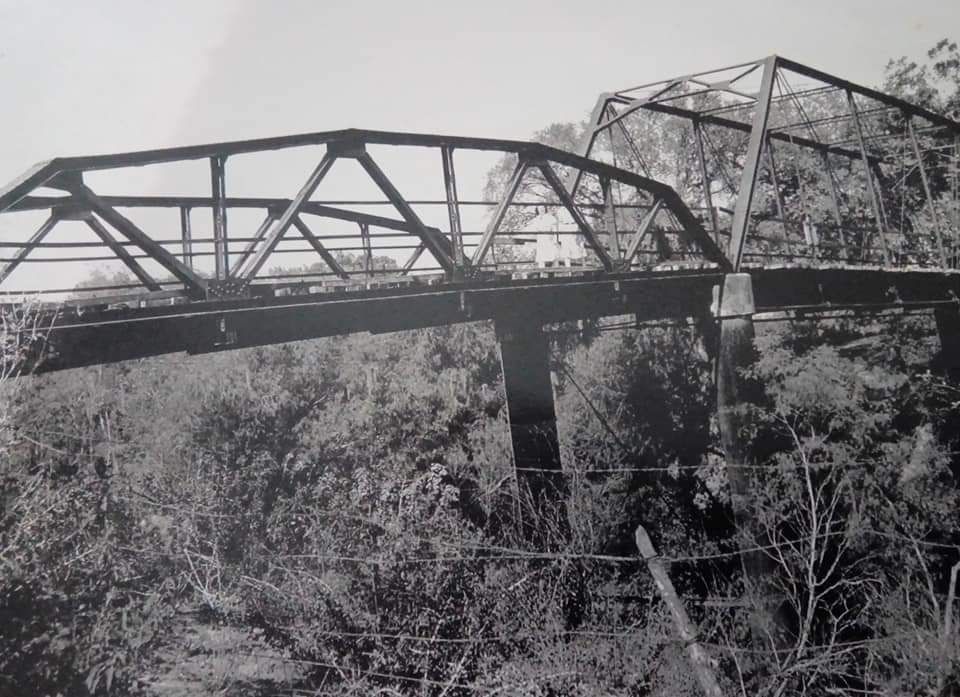 The Sutherland Springs Development Corporation ....  built the first high water bridge over the Cibolo in 1892.

The bridge was of iron and wood construction. It's spanned the Cibolo at the foot of County Avenue to simplify trade from within the San Antonio River Valley. They say that during the well-remembered flood of 1913, the bathhouse knocked off the end of it. It was reconstructed. 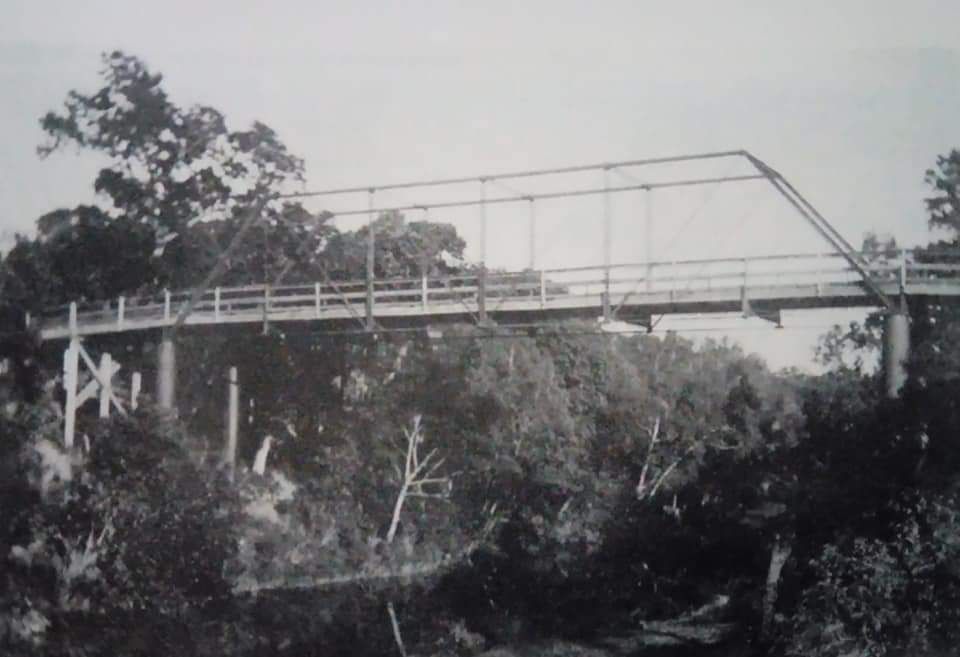 There are many memories of the old high water bridge with its loud creaking boards as vehicles traveled over it.The beloved old wooden bridge was replaced in 1958 when the Texas Department of Transportation built the concrete low water crossing and the Farm to Market Road 539. A 25 foot high concrete Bridge completed in 1995, replaced the low water Bridge.

Picosa Creek Bridge is an abandoned bridge located on County Road 132 in Wilson County Texas. Markus Haas states in BridgeHunters.com that from the date stickers on the back of the Road Closed sign, it appears that this bridge was closed in the early 90s. The road now ends about 50 yards shy of the bridge at the last house's driveway, but can easily be followed to the bridge. The deck is largely gone now.